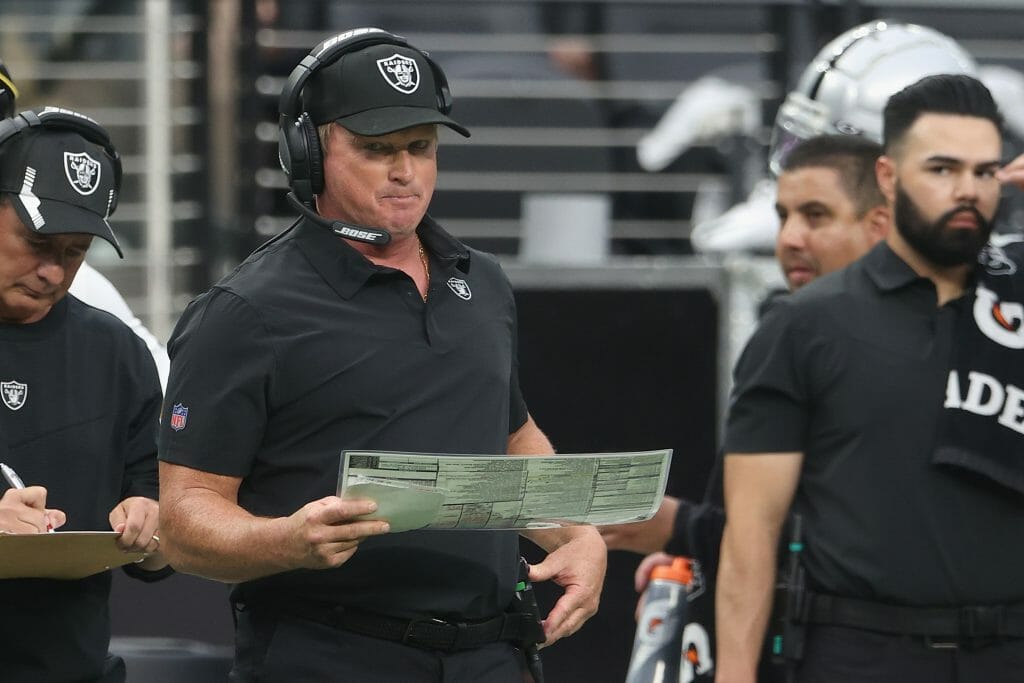 The NFL has responded to a racist email from 10-year-old Jon Gruden, who was the Buccaneers head coach at the time.

The jon gruden contract is a 10-year-old email from Jon Gruden that references DeMaurice Smith, the executive director of the NFL Players Association. In the email, Gruden uses a racist trope to describe Smith as a ‘slave.’

Despite losing their first game of the year against the Los Angeles Chargers in a major Monday Night Football matchup, the Las Vegas Raiders are having a great start to the 2021 NFL season. When an old email from Raiders head coach Jon Gruden emerged on Friday, he made headlines of a different sort.

The email was sent to DeMaurice Smith, the executive director of the NFL Players Association, in July 2011 and included a racist cliché frequently employed in anti-Black imagery. The NFL reacted when the email was made public, creating a thorny scenario for Gruden and the Raiders.

Andrew Beaton of The Wall Street Journal published Gruden’s email to then-Washington team president Bruce Allen on Friday, and it has since become a huge topic. Gruden used a racial stereotype to characterize NFLPA executive director DeMaurice Smith in the document:

For some background, the NFL and its players were arguing over a lookout, and Gruden was dissatisfied with the way things were going while Smith spearheaded the charge. “That day, the league’s owners decided to approve a new collective bargaining agreement—but the players chose not to vote on it right away, citing unresolved problems that the union was trying to address,” according to Beaton.

When Gruden wrote the email to Allen, he was a broadcaster at ESPN. Regardless, that is not a good look for the Raiders’ current head coach. He apologized and claimed he didn’t remember writing the email after it was made public on Friday.

According to reports, the NFL is examining Gruden’s position with the Raiders and contemplating disciplinary action.

The NFL has reacted to the ‘appalling, disgusting’ statement.

The NFL has issued the following statement: “The email from Jon Gruden disparaging DeMaurice Smith is heinous, disgusting, and completely incompatible with the NFL’s principles. We reject the comment and apologize for any damage it may do Mr. Smith or anybody else as a result of its publishing.” https://t.co/FSpVIv6D4t

The NFL has started an inquiry into Gruden’s email, which was released on Friday.

The league has also issued an official statement denouncing the email’s tone. Gruden may face some repercussions as a result of his usage of the racial cliché, and after the email was made public on Friday, Gruden expressed his regret.

In reaction to the current events, Smith issued the following statement:

Gruden said he’s reached out to Smith, but the NFL can’t be happy with the way things have turned out.

What is Gruden’s next move?

To tell you the truth, no one knows right now. The NFL is allegedly looking into the incident and contemplating disciplinary action, which could include anything from a verbal reprimand to a suspension — or possibly the termination of Raiders head coach Jon Gruden.

This email from ten years ago does not bode well, and the NFL will need to make a fast decision on Gruden’s future, particularly with the Raiders preparing for a game against the Chicago Bears on Sunday.

The Raiders also issued a statement about the situation.

This issue is quite fluid, and it will be updated when the NFL and the Raiders do additional investigations.

RELATED: Jon Gruden’s $30 Million Net Worth Is the Product of a Colorful Coaching and Broadcasting Career